Before starting with anything else and boasting about native language quizzes initiative as TackOn’s own idea, let us make it clear - this was never our idea! I’m indebted to a secret superstar who incepted in me an idea of doing a Telugu-Tamil quiz but refusing to be a part of it due to some personal reasons.

Despite being an anonymous secret superstar, the person’s ideas have always spelt a lucky charm and blessed us with amazing responses and love from everyone!

With this inspiration and the person’s refusal to be the part of the project, I had to search for a translator and a host for Tamil part of the Bilingual quiz on Telugu and Tamil cinema.

The help came from Raja KV and Md. Ansar of Chennai Quiz Factory. Albeit having an experience of framing and hosting a couple of quizzes in Telugu, curating content for a bilingual quiz on films that are well remembered in both Telugu and Tamil was a unique journey filled with fun and challenges!

Our sole aim while making the cinema quiz was to make it accessible to both quizzers and non-quizzers equally. We are delighted that it caught the eye of non-quizzers and they thoroughly enjoyed it.

I personally am delighted to have hosted the first-ever Telugu and Tamil bilingual quiz along with Raja KV, who says-


It was an honour and pride to present a quiz in a language with the world’s oldest heritage and grammar - Tamil, as a part of bilingual Telugu-Tamil quiz on behalf of TackOn. The quiz proved that the people’s interest in native language quizzes is very much alive and is something that can be looked into deeply by other quiz masters. I’m proud, satisfied, and happy to have hosted a Tamil quiz!

As rightly pointed out by Raja about the people’s interest, while working on the project we never had the slightest hint that it would trigger interest among other language speakers to message us appreciating the initiative and expressing their desire to participate or host similar quizzes in their respective languages.

Encouraged by the lovely response we announced and hosted a quiz in Odia by a well-known quizzer from Odisha, Pabitra Narayan. This is what he says about his experience after hosting the live quiz -


Though having conducted quizzes in various genres, hosting a quiz about Odia Culture, Culinary, and Politics in Odia was an entirely new and a great experience for me. It was really awesome to see people from other states and languages to actively participate in the quiz. Looking forward for more such quizzes on regular basis. Thanks to TackOn for providing the opportunity.

Next came a quiz by the person who was impressed by the Odia quiz and volunteered to host a quiz in Bengali. Anindita Basu Roy says this about her Bangla quiz -


It was 16th of May and the Odia quiz had just been conducted. Looking at the love of one’s mother tongue, I offered my services for the Bangla quiz. It was a surreal experience to conduct a quiz in my own mother tongue! Seeing so much of participation from fellow Bengali quizzers, I couldn’t feel more proud of my culture and tradition! It was a scintillating experience and looking forward to many such opportunities!

A great initiative by TackOn for conducting quizzes in regional languages and spreading the religion of quizzing to new people. Combination of some known and unknown trivia, it was an enjoyable set of questions. I believe it will make people curious to know more about the interesting facts and trivia’s about their city, state, traditions, and language, says Dipayan Sen, a participant of Bangla quiz.

Next came a series of quizzes in Marathi, Kannada, and Malayalam.

It was a pleasure hosting the Marathi quiz since it always gives me pleasure to do something in my mother tongue. It was a very satisfying experience looking at the response I received. I appreciate this wonderful initiative by TackOn. There are less quality quizzes in regional today, so would definitely like to do more such quizzes in the future!

The Kannada and Malayalam quizzes were also well received by the audience. And surprisingly a major percentage of them were non-quizzers!


Sundeep's quiz exceeded my expectations. While Sundeep's reputation as a QM who sets great funda-type questions precedes him, the fact that it was all Karnataka-centric and in impeccable Kannada (not just the questions but the hosting, answers, and explanations), were all reminiscent of legendary QM on DD Chandana, Dr Na Someshwara of Thatt Anta Heli fame- many a Karnataka quizzer's first introduction to quizzing. I also especially liked the fact that none of the questions was recycled from other quizzes on the topic, or "Peters". Looking forward to more :)

- Says Ananya Upadhya, founder of 'A HERd of Quizzers' (An Instagram page) and a participant in Kannada Quiz.

The Malayalam quiz hosted in the competitive format by Aravind Anil of Cochin’s ChaiPeQuiz has again received a humongous response. Aravind says,


The Kerala Quiz hosted as part of the bilingual series of TackOn was a refreshing experience, and Chai Pe Quiz is glad to be part of this endeavour. We are happy to hear the responses from people, irrespective of whether they are regular quizzers or not, or from Kerala or outside, equally had fun attending. The main idea of this quiz was to introduce some cool facts about the state, the movies, food and culture, to a largely non-Malayali audience and we are excited about the amazing turnout it received. Hoping to be part of more such ventures in the future.

Next in line, we have a Hindi quiz by the well-known quiz master from Bhubaneswar, Nishant Nihar. We invite you all to actively take part in the quiz live on YouTube and get the taste of Native language quizzing!

The Hindi quiz will mark the end of Season of 8th Schedule Quizzes. Stay tuned to our social media channels to be updated about Season 2 and other initiatives of TackOn.

Once again we thank everyone for their love and support towards this initiative. And a very special thanks to the secret superstar without whose inspiration this initiative would have never materialised!

Popular posts from this blog

May 23, 2020
Inspired by the lovely response received for the quizzes hosted in Telugu, we experimented with an online live bilingual quiz on Telugu and Tamil Cinema. Boom! It was a hit. People loved it and we were overwhelmed by the messages and requests to host similar quizzes in other regional languages of India! This reminded us of a quote by Nelson Mandela... If you talk to a man in the language he understands, that will go into his head. If you talk to him in his language, it goes into his heart. Encouraged by the love and support, we enabled the regional languages quizzes to be hosted live on our Facebook page by the quiz masters of respective languages. Every other native language quiz has surprised us by the number of active participants, especially from the non-quizzing circles and followed by the encouraging reviews! Here is the list and schedule of quizzes hosted under this series: Click here for PPTs of quizzes hosted under The 8th Schedule Quizzes   Telugu - Tamil Cinema Quiz By TackO
Read more 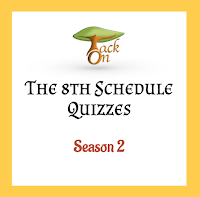 Firstly, a huge shoutout to all the participants who enthusiastically participated and encouraged us from the very first Telugu-Tamil Quiz until the last Hindi Quiz in Season 1 of the 8th  Schedule Quizzes. And a special thanks to the person who inspired us to come up with the first bilingual quiz, which in turn encouraged others to host and take part in the quizzes of their respective languages and thus culminating  in the initiative of "8th Schedule Quizzes." Also, the credit of naming the initiative after a schedule in Indian Constitution goes to Ananya Upadhya, the founder of ' A HERd of Quizzers ' (A popular Instagram page). Click here for videos of Season 1 quizzes Click here for the quiz sets hosted under Season 1 Now, we announce the Season 2 of 8th Schedule Quizzes with quizzes in Telugu, Bengali, Tamil and more lined up over the next few weeks. Schedule of which will be updated soon on our social media platforms. We look forward for your active
Read more